Autumn is by far my most favourite season, but it’s really underrepresented in my wardrobe! I think most of us in the sewing community would agree – Autumn can be a little bit tricky to sew for. It can definitely be done though! Although, you don’t necessarily have to sew things specifically for Autumn thought if you don’t want to, in fact I wrote a blog post a while ago all about making your clothes work pretty much all year round. If you’d like to read it, just click the image below and the post will open for you in another window.

So – I’m a big proponent for layering when it comes to autumn dressing. Items for layering and what I consider to be autumnal colours (so things like forest green, rusty sort of orange, browns, dark reds and yellows), which are pretty much just any colour that a leaf might go in autumn really, are what  I think are really important for an autumn wardrobe. I haven’t made all of the patterns mentioned in this post yet, but I promise that they will all be made up by the end of autumn, and I’ll check back in with a blog post with all of the finished makes and how I’ve been styling them!

Of course, you’ll all have heard about the Nina Lee Kew Dress. Who hasn’t?! This is the only version of the Kew that I’ve made so far (I actually finished it yesterday, even though I started it about two months ago – it ended up being one of those makes that I popped aside briefly and then it slipped my mind completely by accident) but I’ll definitely be making a few more! There are three versions to choose from – four if you count not including the little cold shoulder detail, which I didn’t in mine – and I think version two (without the ruffley bit) and version three would both be great autumn makes.

This one here is made in the William Morris Artichoke fabric from Minerva Crafts (click that hyperlink if you’d like to have a look) which was a really lovely poplin – I’d really recommend it! I probably shouldn’t go into too much detail about the dress that I made, because it’ll be going up on the Minerva Crafts blog soon (don’t worry, I’ll let you know when it’s up), so I’ll just waffle on a bit more about how it’ll be a great layering option. 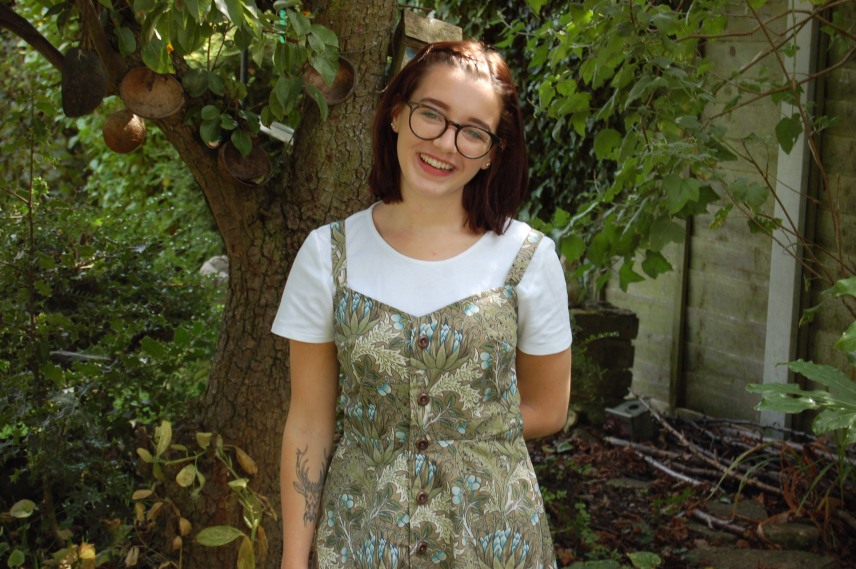 As you can see in the picture, I have a simple white jersey top on underneath the dress. To be honest with you, I never wear any strappy sort of dresses without a top underneath, which I assume is why layering comes so naturally to me! What I’m trying to say is, don’t hurry to banish your ‘summer’ dress patterns to the back of your pattern drawer as soon as the air turns chilly –  you can easily adapt them into something more autumnal by making them in a slightly heavier fabric (make sure to check the fabric recommendations though), or even just a darker colour. When you’re going through your wardrobe, taking out your summer clothes and popping autumn ones in, always think about whether you could use them to layer a jumper or long sleeved top underneath, or even over the top! Which leads me nicely onto my next suggestion…

SEW OVER IT ULTIMATE SHIRT

I’ve made two versions of the Sew Over It Ultimate Shirt, and both have been worn exclusively tied at the waist like this over something else (because I haven’t gotten around to doing a bust adjustment yet, so neither of them could actually be done up anyway, but I’m seeing it as a happy accident because it has led to the discovery of wearing them like this instead).

I am day-to-day, a very casual dresser. I love the idea of wearing a sleek silk button-up shirt tucked into jeans and wearing heels just to pop into the local town, but I’m just not that kind of elegant gal. I wish I was, but I’m just so much more comfortable not doing that – just as well really, I need crutches to walk in flat shoes, let alone heels! At the same time though, I really didn’t want to have to forget the idea of a casual shirt for wearing day-to-day. And thanks to the Sew Over It Ultimate Shirt and my slightly disproportionate bust, the tie-at-the-waist, buttonless shirt look has become one of the most worn things in my wardrobe.

This is a great alternative to  a cardigan, and I think makes you look like you’ve put a lot of thought into your outfit when you really haven’t. I’m particularly fond of this style being worn over dresses – I see a lot of Ultimate Shirt and Kew Dress pairings in my future, and love popping it over my…

SEW OVER IT ROSIE DRESS

What a seamless transition. That wasn’t even planned! If you want an idea of how the Ultimate Shirt looks layered over the ever-so-summery Rosie Dress from Sew Over It, have a look at this picture of me looking slightly sweaty and very tired after a lovely day of fabric shopping: 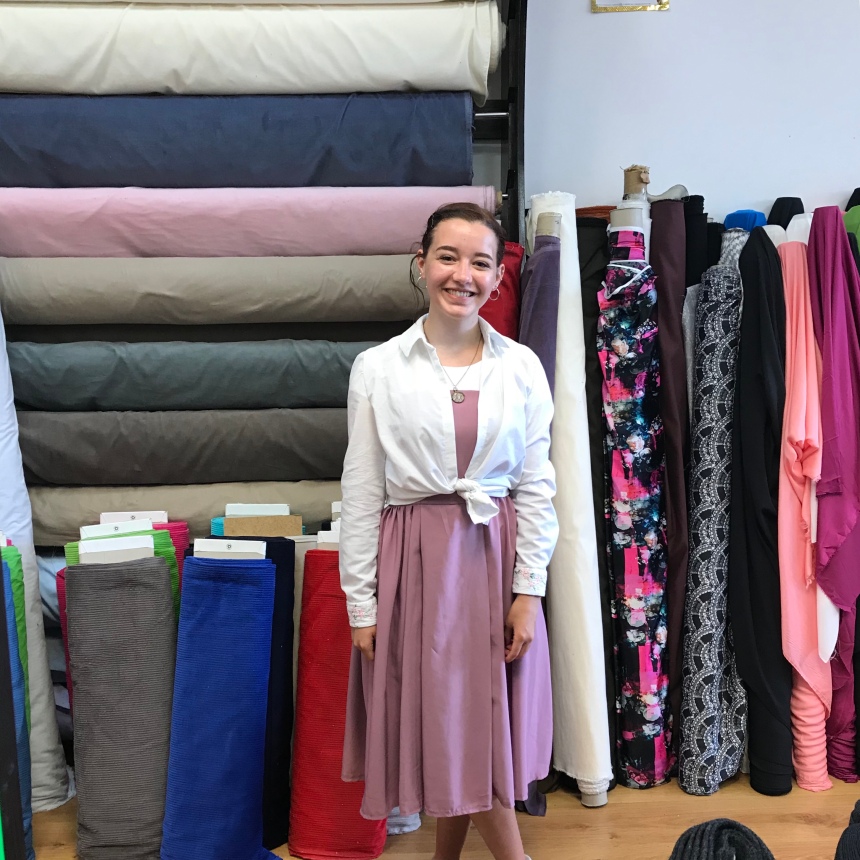 I won’t blab on too much about the Rosie dress, because I’d only say exactly the same things about layering as I did for the Kew dress – so you can just scroll back up and read those bits! A real bonus with Rosie is that it’s well suited to medium weight fabrics such as linen and medium-weight cotton, which can really go a long way in keeping you nice and warm. Layer a t-shirt underneath (or turtleneck, like in the photo below) and a tied up shirt over the top, and you’ll be good to go!

I’ll confess, these last two patterns are ones that I haven’t gotten around to making yet, but that I’ll know will be autumn staples soon enough!

I haven’t seen any finished Alphonse trousers on my Instagram, but I’m a big ol’ fan of RDC. They’re a wonderfully stylish independent French pattern company, and I want pretty much every single one of their patterns! If you’re not a French speaker (which I most definitely am not, I was horrendous at French), they have been wonderful enough to translate a lot of their instructions into English – just make sure that you change the language from French to English when you order the pattern!

I love the sort of androgynous look that a lot of the RDC patterns have, and these trousers are no exception. I’m just imagining a lovely charcoal pair made from a wool blend… hopefully I’ll have some just like that to show you at the end of the season! I’ve looked through the instructions, which have been translated wonderfully, and am very much looking forward to the challenge.

These culottes have been popping up on my Instagram feed for yonks. I’ve never been sure if I could pull off the wide-legged look myself, in case they made me look even shorter than I already do, but after hearing so many glowing reviews of the pattern and seeing them look wonderful on ladies of all shapes and sizes, I decided to take the plunge.

These are being cut out right after I finish writing this blog post, and I’ll be making a make with me video as I go along sewing them! These culottes are suited to loads of different fabrics, and look like they pair really well with a knit top or cropped jumper. Perfect for any season really, but especially autumn!

And that’s that! Those are my five top patterns to sew this autumn to try and bulk up my cool weather wardrobe. I do hope you’ve enjoyed it, here’s a picture of me and one of our lovely little cats to leave you on:

I stand very small at 4'11', and even smaller when I'm sitting in a wheelchair, which I often have to because of my illness - Ehlers Danlos Syndrome. I distract myself from my condition by knitting, sewing and crocheting, which are things this blog is all about. I hope you enjoy your time here and come again for my next post! 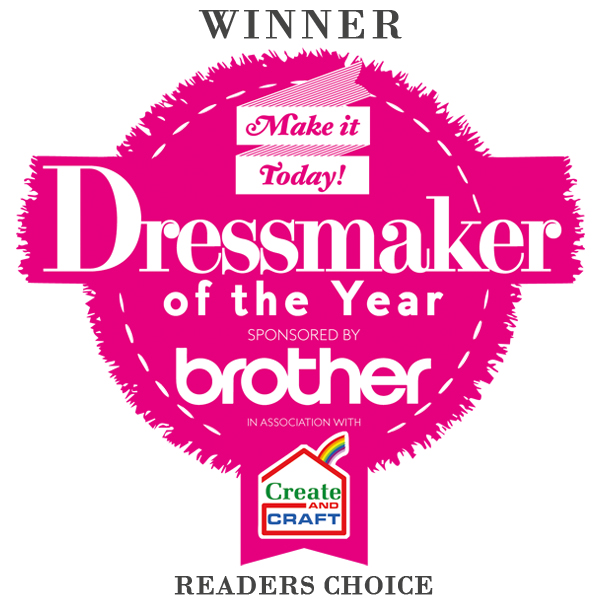